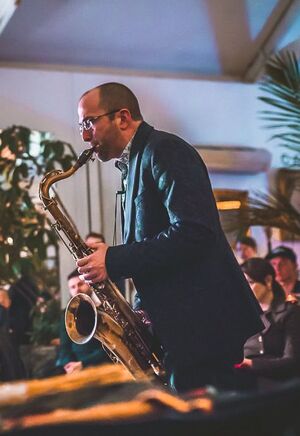 The Tim Clarkson Trio has performed together and individually at the 55 Bar in New York City and worldwide, featuring on ABC Radio National, at festivals and local clubs throughout Sydney for the last twelve years, growing in versatility and intuitive understanding of the rhythm and complexity of contemporary jazz. Previous albums include "Evolution of Beauty" with ex-pat Barney McAll, and New York musicians Dan Weiss (David Binney) and Hans Glawischnig (Chick Corea), and the trio's "Land of Free Men" was ABC Jazz album of the week and has received outstanding praise.

“The stars seem to have aligned themselves… His playing achieves an aim of “stillness” in the air that is certainly evident.” 4/5 stars  – Peter Wockner, Jazz and Beyond

“So Alex Boneham’s bass and Cameron Reid’s drums are very much equal voices with Clarkson’s tenor saxophone, which often twists itself into the knotty rhythms rather than flying above them; rhythms made even more sinewy by Boneham’s singular vigour”.     3.5 /5 stars – John Shand, Sydney Morning Herald